Most people immediately think that orchids are beautiful tropical plants with large flowers. In fact, this association is not wrong because the majority of the circa 20.000 species of this plant family grow in the tropics. But also in Europe are circa 700 wild growing orchid species. The family of orchids (Orchidaceae) belongs within the class of angiosperms (Magnoliopsida) to the monocotyledons (Monokotyledonen). Whether the flowers of a species are only a few millimetres large and inconspicuous or the flowers are almost giant and very colourful, the flower structure always follows the same groundplan. The flower is stalked or sessile with an epigynous ovary. The pedicel or the ovary is mostly rotated 180° so that the lip points downward. By a few European species this rotation remains undone or a rotation by 360° is existent so that the lip points upward. 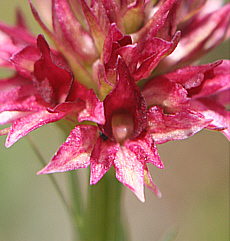 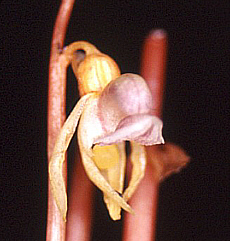 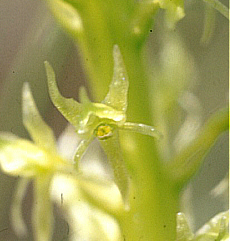 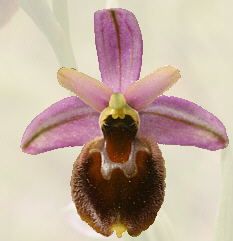 As example the whole flower of Ophrys panattensis 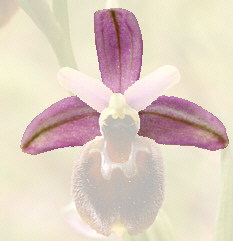 which consists of an external circle (emphasized are the sepals) and 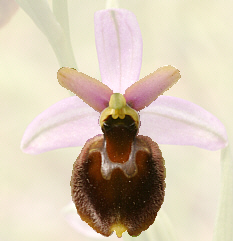 of an internal circle (emphasized are the petals and the lip).

The stamens and the style are grown together to a column (gynostemium). All European orchids show one stamen, only member sof the taxon Cypripedium show two stamens. The stamens show for their part two loculi in which is located one pollinium each. A pollinium consists of an adhesive disc and a lot of pollen which is to a mass agglutinates. With the adhesive disc the pollinium is attached to the insect pollinator before this gives the pollinium away to the style of another flower. The stigma is situated behind the loculi. 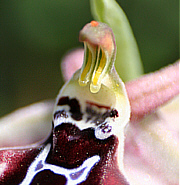 View of two loculi with the pollinia at Ophrys cretica ssp. beloniae 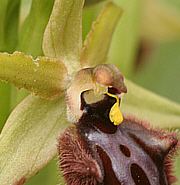 Here, at Ophrys incubaceae, a pollinium has almost been removed. 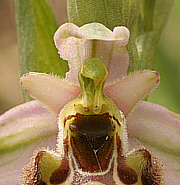 At this Ophrys annae one pollinium has already been removed, you can see the empty loculus.

After succesful pollination seeds are produced. The family of orchids has a special position in propagation. The most plants provide their seeds with a lot of nutritive tissue which the seedling reachs for development as long as the seedling has enough roots and leaves for selfsufficiency developed. However, the seeds of orchids contain almost no nutritive tissue (endosperm), so that the seeds depend on help of soil fungi for germination. The fungi are attracted by different substances like lipids. Then the mycorrhizae of the fungi start with the digestion of the seed capsule. The embryo develops from the germ layer and enters into symbiosis with soil fungi at least for the first time. The fungus delivers the orchid seedling water and nutrients and is essential for its growth. Some species are autarkic in old age, they can overcome their dependency on soil fungi. Whereas other species depend the whole life on soil fungi for their own supply. They are mycoheterotrophic plants The renouncment of an accoutrement of the seeds with nutritive tissue (endosperm) offers a great advantage however. Because of the fact that orchid seeds almost consist only of a seed coat and a hereditary disposition, they are extremely petite and lightweight. A seed capsule contains by the most European orchid species circa 10.000 dust fine seeds. By the European Lady’s Slipper Orchid (Cypripedium calceolus) is even up to 40.000 seeds/seed capsule possible. The seed dispersal happens by the wind, which dispers the finest seeds for several kilometres. Because of the high demands on the habitat the possibility is raised that the seed comes to rest on a fit place. Especial in the tropics is this obvious where the most orchids grow epiphytic. Epiphytes grow on trees where they are much better provided with light. With their dust fine seeds orchids have found a suitable way to colonise the crowns of neighbouring rain forest giants.